#WriteTip: Getting Into the Habit

Habit. It kind of sounds like a bad word…probably because for most of our lives we’re told we need to “break that bad habit”. Be that habit smoking or drinking too much soda or indulging in a candy bar once too often.

One thing I’ve learned over time: it’s much easier to learn a bad habit than it is a good one. I think because the bad habits can be so fun – I mean, who doesn’t want to spend a day in the pool rather than at the office? Who doesn’t want another slice of Chocolate Decadance or one more drink of that mojito? We’re human. We like the things that, in many cases, aren’t great for us.

According to Mr. Webster, an habit is “a behavior pattern regularly followed until it has become almost involuntary”. In other words, a habit is a learned behavior, and it doesn’t have to be a bad learned behavior.

I think the key to creating any habit is to begin by looking at it as a positive rather than a negative. Instead of “I can never eat chocolate again” look at it as “I’m going to enjoy one slice of the best chocolate cake ever and I’m going to enjoy every second of it”. Instead of “I can never laze in the pool on a hot summer day!” think “I’m going to meet __(goal)__ before I laze in the pool this afternoon”.

Y’all know I love my planner – it’s so much easier to have a list of to-dos and deadlines and expectations and family events all in one place that I can keep track of. But, another thing I do is track my habits – the good and the bad. Up above you’ll see the habit tracker I created for 2018 (feel free to download my Habit Tracker and other printables for writers here). I don’t fill it out every month, but I do find it helpful to use it every couple of months, just to make sure I’m doing the things I need to be doing – like exercise, like drinking enough water, like making my bed time. I’m happier, in general, when those things are going well, and I’m more likely to follow through on work goals when I’m also meeting my personal/health goals. 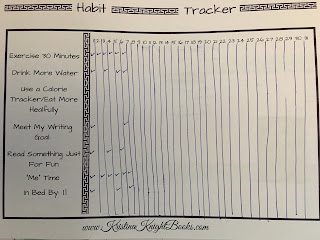 Here’s a copy of the tracker so far for August. Making those checkmarks is very satisfying…and as you can see, I’m not perfect. I haven’t been tracking my meals like I should (which is probably why, even though I’m hitting my bed time goal, I’m still feeling a little tired and “off”). But, now I can see where I’m not being the best me I can be (as bebe’s teacher liked to say in 4th grade), and I know how I can make a small change to start feeling better, in general.

Have you tried tracking your habits? Did it work for you? Share in the comments!